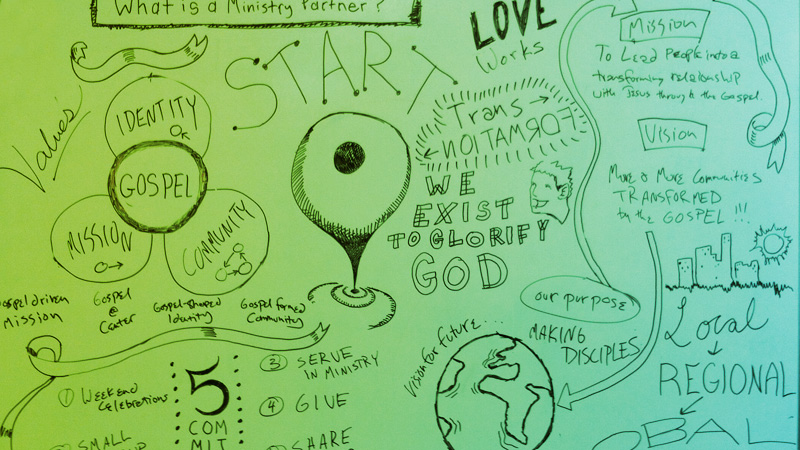 The Gospel is the story of how God created the world and the people in it and how mankind has and continues to rebel against God and reject His authority by sinning. Sin formed a barrier between sinful people and our holy Creator, preventing us from glorifying Him and delighting in Him as He deserves. Mankind instead became by nature children of wrath, deserving of eternal judgment.

The Gospel is the good news of how God wasn’t content to leave it at that and in unfathomable love crafted a marvelous plan to reconcile mankind with Himself and how that plan was carried out by a person, His Son Jesus, the only One Who could carry it out. And how Jesus came to our planet, lived the absolutely perfect life that none of us could live then died on an old rugged cross, shedding His blood in payment for our sins.

Three days later the Father raised Jesus from the tomb demonstrating that He was satisfied with the Son’s payment. Jesus then appeared to many people as proof of His resurrection before ascending back into heaven and sitting down at the right hand of the Father, signifying that His redeeming work was finished.

We believe there is one, and only one, living and true God and His divine nature is undivided and indivisible. There exist three eternal distinctions in the divine essence, known respectively as the Father, Son, and Holy Spirit.

We believe that Jesus Christ is the eternal, pre-existent Son of God. He appeared and ministered in the Old Testament. He became flesh in the person of Jesus of Nazareth and was born of the virgin Mary by miraculous conception and virgin birth. He is fully God and fully man; perfect deity and humanity. He lived a sinless human life, perfect by fulfilling the divine law, and then offered Himself a sacrifice for the sins of every person. He died on the cross, shedding His blood, in full substitution and atonement for the sins of all men everywhere. He was buried and, on the third day, He arose bodily into heaven where, at the right hand of the Father, He now intercedes for those who believe on Him and await his literal return.

We believe that the Holy Spirit is a divine person, equal with God the Father and God the Son.

We believe that man came into being through a special creative act of God. Man is the crowning part of God's creation, in that he was created in God's image and was given dominion over the earth.

We believe that the Holy Scriptures are the inerrant, infallible, verbally and plenarily inspired, authoritative Word of God.

We believe that the Church of Jesus Christ needs to be understood in two senses, namely universal and local.

We believe in the existence of specially created beings called angels.

We believe that sin is a deification of self, a dethronement of God, a failure to obey God's law and/or a violation of God's law. It entered the universe when Lucifer attempted to revolt against God. It entered the world when Adam and Eve disobeyed God in the Garden. All men have inherited the sin nature from Adam and all are totally depraved prior to salvation. Sin has tragic results upon others. The basis of ultimate and complete victory over sin is found in the death and resurrection of Christ.