Mama Cindy again- hugs from ! We woke up to a cloudy morning followed by rain then bright sun all during breakfast The weather has been very weird, but without snow or ice or freezing temps, we’ll take it!

After passing out in our beds, exhausted from an 18-hour-travel-day, we woke up in good spirits and headed church. Pastor Rex from our team was preaching from Galatians and spoke about churches preaching the One True Gospel and not getting caught up in false teachings. One young man trusted Christ as savior and others came to pray- it was a great morning, the church was full and God was glorified! 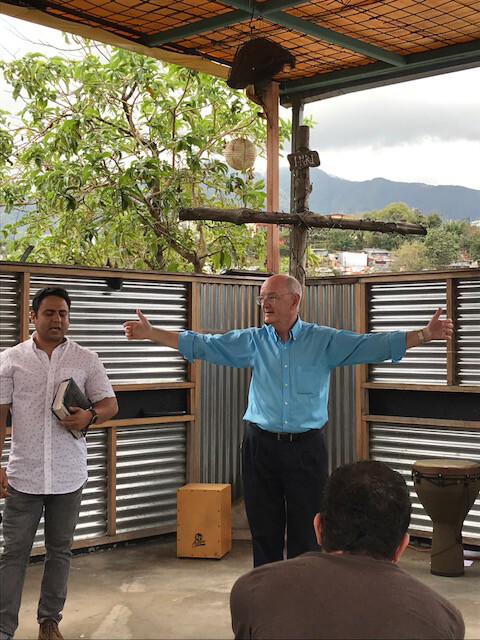 After church we made lunch and ate with 15 kids from an indigenous tribe in CR - they were precious & their missionary mom is a saint- she’s pregnant, has a toddler, and has been housing all 15 kids in her apartment for 3 weeks while they go . We then went to watch the LaViña boys (+Paola) play soccer. Several of our brave men played on thrust teams - Jeff did quite a spectacular somersault, as did Ed, and Todd caught some air in the goal box while Steve Selegue actually toppled Cristian and laid on him as play commenced! Fortunately, all of the gringos came out unscathed and able to work tomorrow! What a fun time to get to know the young people from the community - I think they were happy to see us cheer them on!

Sunday night brought a Men’s Dinner & I bet there were a good 24 or more men from the church & community who assembled together for some yummy con polo (chicken & rice with vegetables plus a crunchy cabbage slaw) and great fellowship. Jeff spoke on our identity in Christ and asked the men if they were choosing to live as a son or an orphan. They followed with a small group time of conversation and prayer. Already bonds of friendship are being formed with new - a little love & attention goes a long way in this community!

During the men’s dinner, the VBS crew met to discuss logistics like how to fit 35 children into a room that comfortably seats 12 and where on earth are the invitations in all.

those bags and is it too late to knock down a few walls and give us more space?? Todd & Sally have invested so much time & effort into this VBS- Angie & David have already been trying to recruit them! Pray that lots of kids show up to hear about Jesus - this is their summer break so they are in dire need of things to do, as are their parents!! Last year we had 80 kids- pray for a wildly successful time with the kiddos from this area!

Our team is awesome- such good workers, big hearts, servant leaders, FLEXIBLE, gracious, helpful-pray for safe work as the projects begin in full force tomorrow! So much activity, all God’s glorify!! Way past time to get to sleep - long days ahead! Keep praying for us as we serve the Lord in !